On March 18th, UCU’s National Executive Committee,  passed a motion calling for the University and College Lecturer’s union to set up a summer school in the Calais refugee camp.

This weekend (7th March) a fact finding delegation from UCU went over to the camp to look at how this can be implemented. We publish their report here, which was prepared by Dave Muritu from the NEC.

Colleagues may also want to keep in touch with Trade Unionists for Calais, on their Facebook page here 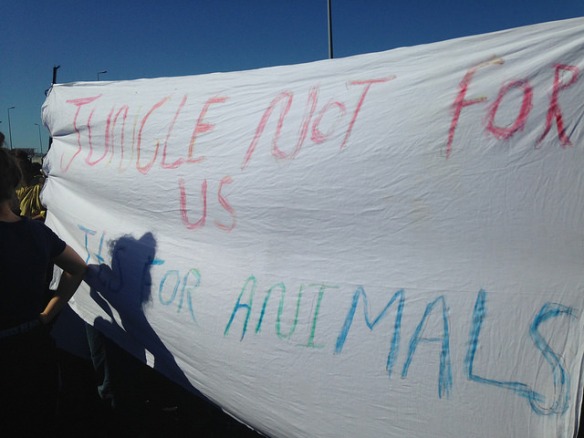 Our trip to the camp in Calais with a UCU delegation was full of stark contrasts. Our aim was to spend a day in the camp with a view as to find out what UCU members could do to help these four or so thousand refugees realise their simple desire to live a normal and productive life in Britain.

The day began with a tour of the Care 4 Calais warehouse, where we could not help but be impressed by the level of organisation and attention to detail that went in to the massive operation to sort and distribute, clothes, food, tents, building materials and more. This was in contrast with the sight we were confronted with as we entered the camp, several acres of wasteland that used to be people’s shelter and make shift homes before the authorities demolished the southern part of the camp.

Our first destination was one of the two schools, which, along with a mosque and a church, were the only structures still standing in this part of the camp. We witnessed what you would see in any school or college; the teaching of English in small groups scattered around classrooms and a larger group being taught French. As more students gravitated towards the school it became apparent that ad hoc lessons were popping up all around the school, in and outside the classrooms. Our guide was asked, almost mid-sentence, if she was a teacher and could she help a young Eritrean man with his French. From what we saw, it was clear that there could never be too many teachers in camp. They would always find students who would hang on their every word.

Later in the day, we were invited for tea by a group of Sudanese men in what was a shelter built from wood and tarpaulin. It felt important for them to have the opportunity to extent their hospitality, in some ways to tell some of their story but more so to enjoy the social normality that it represented. They had all been in Calais for a different length of time but they all shared the determination that they would not give up the nightly ritual of risking life and limb to try to ‘jump’ and make it to Britain to restart their lives. It was, however, noticeable that those who had been living in these incredibly difficult conditions for longest were showing signs of the emotional toll. What was also very clear was that the prospect of return to where they had come from was out of the question. There was nothing to return to.

Having been to the camp, it has helped to harden my resolve to do everything we can to pressure our Government to get rid of this camp by allowing the refugees in to Britain. It is also clear that my trade union is full of members with loads of the skills that could really do so much good in the camp whilst it is still there. Our job now is to find the best way of making that happen.