Friday night of Congress started off with a fringe meeting looking at how to ensure that the union dealt with a wide range of issues in its campaigning and practice over the next year. Speakers from the devolved nations were Ann Gow from Scotland (UCU Scotland’s incoming President), Renee Prendergast, NEC representative from Northern Ireland who were joined by Vicky Knight, UCU’s incoming President Elect, and national negotiators Jo McNeill and Sean Vernell, with Mark Abel, a representative from the local (Brighton) branch also joining the debate.

A whole range of issues were raised during the meeting, which started with Jo McNeil who argued that in the face of the Trade Union Act, we could still have wins – she thought the NSS boycott had been extremely successful, and solidarity was key, an injury to one was an injury to all. She suggested we did not have a strategy for industrial action. 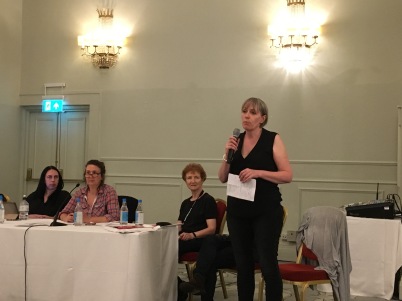 Ann Gow took a different angle, talking of the lessons of Scotland, pointing out that it was a nation and not a region, and consequently worked in a different manner, education, being totally devolved to the Scottish parliament. UCU Scotland negotiated directly with government and in working with all parties in opposing the vested interests of University principals, had been successful on issues such as Governance of universities and also in achieving and retaining Scotland’s no tuition fees policy.  UCU Scotland came together however, with the universities on areas of common ground such as dealing with Brexit and had signed a common cause statement with them and NUS on this. The union also worked with the Universities to lobby the Scottish government on the budget for the university sector. In general UCU Scotland acted as a ‘branch led union’ which talked publicly ‘for the university community’ – not leaving it to university managements to claim this crown. This meant members identified with the union, and thus when industrial action was necessary then it got support. We had had serious industrial action – but this was where it was merited. Current priorities were gender pay and anti-casualisation.

Taking an angle that chimed with the points Jo McNeil had made, Sean Vernell suggested that Corbyn could win and the 9th June might see a Labour government elected. He then suggested the audience should remember the TV drama ‘A very British Coup’ and that we should be ready to defend a radical Labour government. He thought that the union wasn’t yet ready for that type of action and we needed to use the congress to build for this. He felt the concept of local or national was a false polemic, it was always both. Using a phrase that quite a few others  were to repeat during the meeting, he stated ‘You cannot casework yourself out of a crisis.’ He believed getting a 50 percent turnout in ballots was achievable and that ‘we have never had a real campaign’

Renee Prendergast suggested we drew on best practice wherever it arose

Renee Prendergast, looked at the specifics of Northern Ireland, and talked of how a successful union would learn from its different component parts. Regions, nations, and action locally could give positive examples. She believed that local and national issues were both important, although in practice some national actions had not been as successful as local ones. Today’s successful local actions could lay the basis for successful national actions – but that would be in the future. 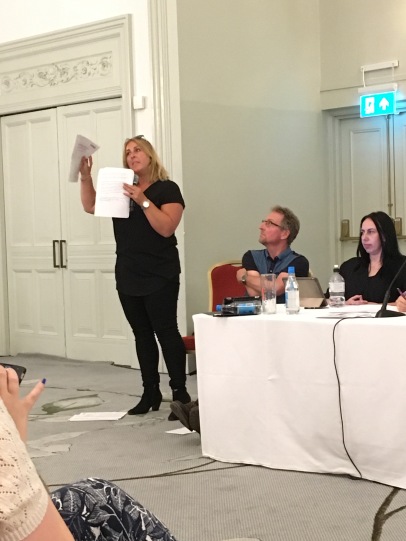 Vicky Knight, current UCU VP and chair of the TUC Women’s Committee outlined the horrific situation women still face in terms of gender pay inequality pointing out that the gap is such that it was equivalent of women working all year, but only being paid up to October, and that the World Economic Forum suggested at current rates it would take 174 years to close the pay gap.

Mark Abel, from Brighton branch, referred to recent industrial action in the university, and how this had been achieved successfully.

In the discussion from the floor, Douglas Chalmers President of UCU Scotland suggested that there was a weakness in reducing what had been suggested by several speakers as ‘national action’ to strike action alone. Successful national action could be something totally different. He suggested that the gains Scotland had made had indeed been through national action, but not necessarily involving strikes. Rather the union had taken the ‘high ground’ and had been active on all sorts of democratic issues, which had won wide public support and support from union members thus achieving the basis for being able to run successful campaigns involving industrial action on the occasions when it was necessary.

Another contribution from President elect Joanna de Groot argued that we had to work smart as well as be strong, and we needed to think through how we worked. There was a huge range of actions we could use to win, so thinking smart about what better delivered jobs, pay deals, gender pay audits etc was crucial. We should work through this bit by bit, but as part of a UK wide strategy.

Other, interesting contributions from a range of strategic and political positions were also made, with the meeting going on for 30 minutes longer than had been planned.

Overall, the debate and discussion was an indication of some of the differences that do surface at Congress between UCU members who perhaps equated a successful union to one that above all saw industrial action – normally strike action – as the touchstone of success, and another, perhaps broader view that believed that the union had to be less ‘economistic’ and more strategic. A more strategic union, working to achieve success would use a whole range of methods, which above all could unite members, making the union a dynamic one which could actually be effective in the post TU Act era. 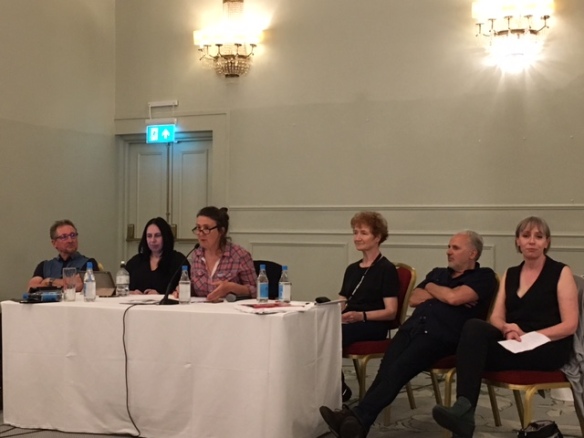